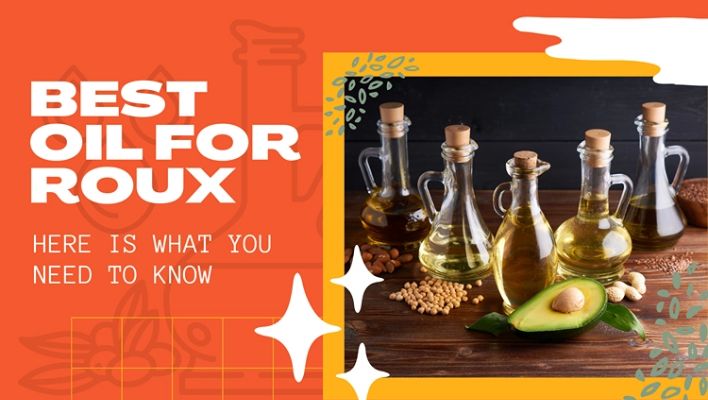 You’re grocery shopping for an upcoming house party. And you want to make some sort of gravy. You haven’t decided which to cook yet.

But what you do know is the sauce needs roux.

And for that, you need flour and fat/oil. Now you’re scratching your head over what oil or fat to get. I’ve been there too.

So. What is the best oil for roux?

There’s no universal oil that is best for roux. Butter is best for white to blonde roux. And neutral oils are best for medium to dark roux. Neutral oils such as canola oil and peanut oil are popular. In the end, it depends on your preference. And the type of roux you’re making.

But, that’s only the summary. You’ll need details to save you from wasting your ingredients. Read my article if you don’t want to make rookie mistakes.

Which is the Best Oil for Roux?

Roux is made from a combination of fat and flour. It’s a thickening agent used in gravies, stews, soups, and sauces. The best flour to oil ratio for roux should be 1:1.

You already knew that by now.

But, you want to make the best roux. So, you want to use the right fats and oil. Depending on your roux recipe, you have to pick your poison.

You might have questions. Is butter or oil better for roux? Should you use grapeseed oil for roux? What’s the best oil for cajun roux?

And since most of you don’t have a Cajun grandmother with secret recipes, I’m here.

But if you’re completely new to making a roux, here are some basics to understand.

Roux needs to be cooked by mixing flour with oil. Or fats such as butter or lard.

For lighter-colored roux, butter is the best option. As it is flavorful and has a lower smoke point. Hence, it’s not suitable for a darker roux. As those need to be cooked longer.

For example, olive oil has a low smoking point. Also, its scent can overpower the taste of your roux. You don’t want an olive oil roux.

If you mess up your roux, there’s no saving your sauce. It’s not the same as putting excess black pepper in beef stew. You have to get your roux right!

So, your pick depends on what type of roux you’re making. I will explain that in detail in the next session.

4 Types of Roux & Which Oils Suit Them Best

Roux types depend on how long they are cooked. And their consistency. I also discuss what type of fat is the best for them.

This type of roux holds its initial color. It is only cooked a bit to remove the starchiness.

The best choice of fat to cook this with is butter. You have to cook white roux for about 2-5 minutes. Until the raw smell of flour is gone.

The texture has to be that of wet sand, and of a light tan color.

White roux has a thick consistency. Hence, they’re used for thickening sauces without adding flavor. Like Alfredo and béchamel.

Unless you want to thin out your alfredo sauce, this is a great choice for milk-based sauces. And chowders too.

When you caramelize your roux to get a slightly darker color, it’s a blond roux. Like Barbie’s beachy blond hair color.

They’re also known as golden or yellow roux.  Blonde roux has to be cooked for 5-10 minutes. Until it smells toasty.

Again, butter is the top pick for this roux. It’s used for sauces that need a golden texture. And for veloute.

It’s commonly used in culinary preparations. As it has great thickening abilities and a balanced flavor.

To make this, cook your roux until it’s almost burnt. It should have a nutty flavor to it. Hence peanut oil can help you here.

The cooking time is about 8-10 minutes Until it turns to a coppery brown hue. You should be getting a nut flavored aroma.

Its thickening power is less. Neutral oils such as canola or peanut oil are suitable for this roux. As oils have a higher smoke point than butter.

Hence, the rough itself is not as thick as lighter roux.

And what’s the best oil for dark roux?  Neutral oils will be your best pick for this roux.

And how to make a roux for gumbo with oil? It’s the dark roux. You can build the flavor of the traditional roux with this.

To achieve this consistency and color, you need to cook for longer. For about 30-40 minutes.

But the cooking time varies on how high you put your heat on. If you’re going to be cooking on higher heat, opt for vegetable oil. Or a mix of oil and butter.

I hope now you understand how each type of roux is made. And what kind of fat or oils it needs. Now you know how to make roux and use it.

Having extra roux in your fridge helps save time. So when you’re making soup next time, you won’t have to whisk a new batch.

Here are my suggestions on how to store your roux-

This helped me reuse my extra roux after those house parties. I was able to cook more gravies without any hassle. Now you can too.

If you don’t want to use butter or neutral oils, I got you too. Smoking points of oils are vital for the roux.

This list should help you figure out which oils will last you longer. But make sure you check flavor compatibility before incorporating them.

How to keep roux from burning?

To keep roux from burning, only picking the best oil for roux isn’t enough. You have to use it correctly too. Depending on the roux, you should pick a suitable oil. To avoid burning, the best option is to cook it at medium heat while continuously stirring. This should prevent clumps from forming.

Why does a roux break?

The right temperature is important. A roux can break for two reasons. If your sauce is too cool or too hot, it will be a problem. If the sauce or liquid is too cool, it will harden the butter. If it’s too hot, it will separate the roux. Hence, pick the best oil for roux.

What can you substitute for flour in a roux?

If you want to substitute flour in roux then add arrowroot or cornstarch to your sauce. Add it at the end of your cooking time. Or, if you want the flavor of roux, swap in sweet rice flour. It will give a silky texture to your sauces.

That’s all I have to say about the best oil for roux. I hope you can make great sauces and soups after this.

Here’s another tip.  If your roux gets burned or it doesn’t taste right, just throw it away. And make a new batch. Because once it’s ruined, there’s no fixing.