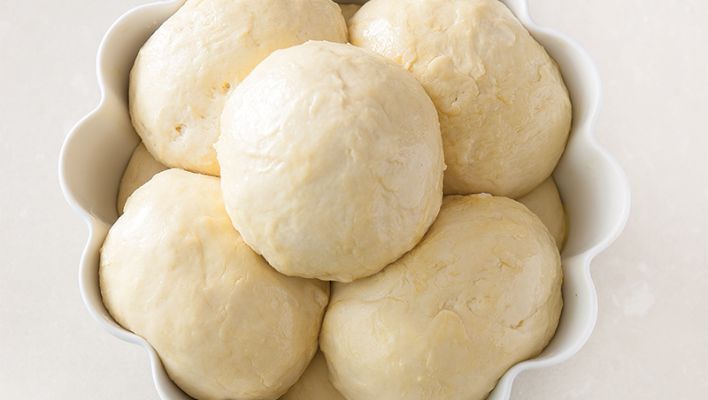 Brioche dough is a soft kind of dough from which brioche bread is made. Brioche dough is pretty easy to make at home. So, you can make burgers or sandwiches at home anytime you want.

So, what can you do with it? Can you freeze brioche dough to store it?

Yes. You can freeze brioche dough. But before that, you have to wrap the dough very well with plastic wrap. If you don’t have the plastic wrap, you could use an air-tight box for putting the dough in. Then you can put the wrapped dough or the box in the freezer and store it for up to 2 weeks.

Now, we’re going to know more about this in detail.

Can You Freeze Brioche Dough?

You already know that you can freeze brioche dough. But first, you just have to make sure that the dough is wrapped up nicely. The wrapping part is very important because the wrap has to be air-tight. For that, plastic wrap is the best option.

But if you don’t have plastic wrap, just use an air-tight box to keep the dough. Then put the wrapped dough or the box of dough in the freezer. Brioche dough lasts in the freezer for up to two weeks.

So, now you know how to store brioche dough. From now on, baking brioche bread will be easier for you.

Because you can make a dough at home in advance and just store it. That’s how freezing homemade brioche dough can help you to use it later for baking brioche bread.

Next, we’re going to know how to defrost a frozen brioche dough. Here is some information about it in this table.

Brioche dough can be defrosted in different ways. Some of the ways are written below.

The easiest way of defrosting the brioche dough is to put the frozen dough in the fridge. Though this way the dough takes the longest to defrost.

Next, put the pan in the fridge and leave it there for a whole night. If you don’t have much time, the brioche dough can stay in the fridge for only 8 hours.

Now keep it out of the fridge. And leave it at normal temperature for about an hour. After that, your dough is ready for baking.

If you defrost the brioche dough with the oven, then it will take less time than in the fridge. Also, the oven will defrost the dough more nicely and perfectly.

Now first, take a baking pan and layer it with some cooking spray. Then take a plastic wrap and do the same thing.

After that, take the dough out of the freezer and put it on the baking pan. Then wrap the top with the plastic wrap which is coated with the cooking spray.

Then put the pan in the oven and heat it for an hour at 100 degrees F. After one hour, take the dough out of the oven and check whether it’s soft or not.

After that, your dough is properly defrosted and ready for baking.

Defrosting the dough in the microwave is the fastest way to defrost it. If you don’t have too much time to defrost the dough, then this is the perfect option for you.

The next step is taking the dough out of the freezer. Then put it on the microwave-safe plate. Then wrap the top with the plastic wrap which you coated earlier with some cooking spray.

Next, put the plate in the microwave. Then choose the high setting option of your microwave and heat the dough for 25 seconds.

Now take the dough out. Flip the dough upside down. Then cover it up. Do it with a plastic wrap. You can heat it for another 25 seconds.

When you’re done with the defrosting, put the dough on a table or somewhere else. Then leave it there at normal temperature for about an hour. And after that, your dough is good to go.

First, you will need ⅓ cups of warm whole milk. Whole milk is a little bit thicker than the other types of milk. Because it contains the whole fat of the milk. The temperature of the milk has to be 80 degrees F – 100 degrees F.

Then you will need 3 tablespoons of granulated sugar and 1 tablespoon of dry yeast. The yeast has to be active.

Next, you will need 3 ¼ cups of all-purpose flour. It would be better if you use unbleached flour. Because the unbleached flour will add more flavor to your brioche bread. And also, the bread will be more nutritious.

Then you will need 5 eggs and 1 teaspoon of kosher salt. Kosher salt is a type of salt that has coarser grains than table salt. And lastly, you will need 1 cup of unsalted butter. The butter has to be unsalted.

First, takes a bowl and mix warm milk, sugar, and yeast in it for ten minutes. Now add 1 and ½ cups of flour and eggs. Then mix it for about 3 minutes or so. Now leave it for another 45 minutes. Make sure to cover the bowl.

After that, Gradually, put the remaining cups of flour. Now knead it for around10 minutes. Don’t forget to add salt. Then add butter to the bowl and mix it again.

Next, take a pan and layer it with some butter. Now place the doughready. In your buttered pan. Cover it with a plastic wrap. Then leave it for about 2 hours to rise. After all this, your brioche dough is baking ready.

How Long Can Brioche Dough Stay in The Fridge?

Can You Overproof Brioche Dough?

Why Is My Brioche Dough Tough?

Your brioche dough might be tough because you probably added too much extra flour in it. When you’re kneading or shaping the dough, try to add a little bit of extra flour. That way, your dough will stay perfectly soft.

Now, if someone asks the question “Can You Freeze Brioche Dough?”, we can clearly say yes.

If you want to make the dough and keep it for later, just freeze the dough properly. Also, you can follow one of the ways of defrosting the dough that has been written above.